Our Program uses Sterile Insect Technique (SIT), producing sterile codling moths and releasing them at regular intervals in orchards to mate with wild moths. The result is a steady reduction in wild codling moth populations.

Sterile Insect Technology (SIT) was developed in the 1930s and first applied to control screw worm pests in 1953. Described as “birth control for insects”, the technology works by pairing sterile male insects with wild female insects so that the females are unable to produce viable offspring. Thirty years of work by scientists at the Pacific Agri-Food Research Centre in Summerland confirmed that the technology was well suited to address the codling moth issue in the fruit growing areas of the Southern Interior. SIR begins with the mass rearing and sexual sterilization of adult Codling moths through gamma radiation at the SIR Facility in Osoyoos, BC. The facility is capable of producing up to 2 million sterilized moths per day. The facility moths are reared on a special diet that contains a red dye that enables SIR field staff to differentiate the sterile facility moths from the wild moths when they are caught in pheromone traps.

The rearing process starts with making moth cages, these special cages are lined with wax paper for the moths to lay their eggs. The paper is then processed, cut to size, and placed on the prepared diet.  The larvae then develop in rearing rooms with strictly controlled light, temperature and humidity. Once they reach day 21 of development, they are moved to a new room that is designed to collect adult moths. After emerging from their cocoons, the adult moths make their way to the black lights in the room and are pulled through a vacuum collection system until they reach the collection room. When the moths reach the cold collection room, they become dormant which allows for gentle handling so that the moths can be packaged, irradiated, and prepared to be released in the orchards by field staff. SIR’s Rearing Facility in Osoyoos, BC Oviposition Room at the Facility 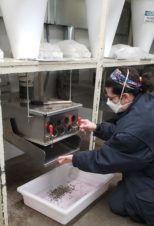 Cold collection room at the facility. Sterile Moths are Kept Cool so They Remain Dormant

Sterilized moths are delivered to orchards in plastic Petri dishes and kept cool so that they remain dormant.

Special devices mounted on 4-wheel ATVs release the moths into orchards in the service area on a weekly basis during the growing season. The moths warm up and fly into the nearby host trees.

A successful sterile insect program requires that the sterile moth population overwhelm the wild, fertile, population, so that wild moths are likely to mate with a sterile moth, producing an infertile egg, and resulting in a decline in the codling moth population. To be fully effective, sterile insect release must be applied over a large geographic area. Good orchard sanitation must also be maintained, and reintroduction of wild codling moths into the area must be controlled or, ideally, prevented.

Sterile insect release is not a stand-alone method of control.  When wild codling moth populations are too high, growers will need to apply other control measures.